I clearly remember one day looking at a tree, tears coming to my eyes and thinking: "If a God exists, it must have something to do with this tree." Many years later, or what it feels like many lifetimes later, I can now understand and see the intrinsic truth revealed to me in those moments:
We are part of one organic eco-system that is a physical manifestation of a divine energy that is much vaster than the sums of all its single parts.

So here are a few facts that will give you a more clear perspective: each second 2.47 acres of rainforest disappear worldwide, that is 214,000 acres per day (an area larger than New York City), 78 million acres per year (an area larger than Poland).
According to The Nature Conservancy, originally, 8 million square miles of tropical rainforest encircled the planet. More than half has been burned, bulldozed and obliterated. Now, only 3.4 million square miles remain. If deforestation continues at current rates, scientists estimate that nearly all tropical rainforest eco-systems will be destroyed by the year 2030. So half the world's forests are now gone, and over 30 million acres more are lost each year. In the U.S. too, more than half our national forests have been logged, mined or otherwise industrialized. 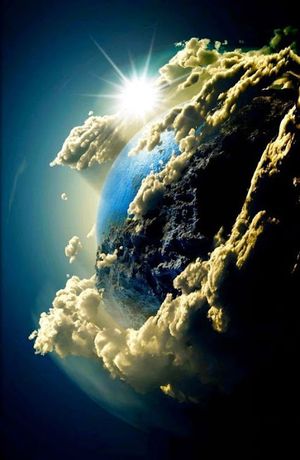 Although rain forests cover less than 2% of the Earth's surface, they are home to more than half of all plant and animal species. There is a natural rhythm within which species become extinct and are replaced by other species that are more suitable to the ever changing climate and natural habitat. If humans weren't here, or if their activities were otherwise, there would be one species becoming extinct every 5 years. This is the pace at which extinction moves as part of a natural process, the ever changing ebb and flow of life. Today, of all the living species, 25,000 are going extinct every year!
What we are witnessing right now is not part of a natural process. Man has affected the environment to a degree never seen before in the billions of years since the planet has been organically alive. Two of the main causes of this global imbalance, together with deforestation, are pollution and over-population. The USA alone, even though it makes up only 5% of the world population, consumes more than 1/3 of the world's wealth and creates 50% of the non- organic waste as well as 25% of the carbon dioxide pollution that is one of the main causes of global climate change.
Our environment has been chained to the gas pumps and to the big oil corporations standing behind them. Drilling and destroying places like the Arctic Wildlife Refuge and Greater Yellowstone, as the current administration would have us do, is not the answer. The USA doesn't have enough oil to drill their way to self-sufficiency. We could empty every oil reserve in America and we'd still be importing vast quantities of oil. But if we simply used available technology, for example to raise fuel economy standards for new cars to 40 miles per gallon, we could save about two million barrels of oil a day - more than the USA imports from Saudi Arabia.

At the same time, the world population is growing at an alarming rate: we are adding the equivalent of another Los Angeles (2 to 3 million people) on the Earth every month. At this rate, by the year 2020 40% of the population on Earth will not have enough water to grow their own food. This is the main reason why many of the big transnational corporations are buying water springs and wells all over the world. You can already see the Coca-Cola logo on some of the mineral water bottles. Water is soon going to become a luxury item.
And without projecting too far into the future, right now every 3.6 seconds someone dies of hunger, and 75% are children. This is on a planet that could feed all its inhabitants many times over. There is a great abundance that is not being distributed equally. Just with the money that is being spent for the war in Iraq we could have greatly contributed to solving the problem of starvation in Africa, helping to create the much needed infrastructures that are necessary to grow food on that continent.

On the other hand, the existence of a 'third world' is just a reflection, on a larger scale, of a way of thinking that permeates our Western societies and our minds, where 'I' am separate from 'you', where the individual is not seen as interrelated with all other beings on Earth. In our materialistic Western culture, our fundamental concern is the individual and his accumulation of material wealth (as a replacement/symbol for happiness). Because of this we have lost the sense of a larger meaning beyond us. We have lost touch with the sense that all living beings are sharing the same Earth: no matter if they are white or black, Buddhist or Christian, man or woman, rich or poor, man or fish, we all share the same home. That was the basic insight that struck most of the astronauts when they started space travel: they all said how amazingly beautiful the 'blue planet' looked from out in space, and how obvious it was that there are no lines defining borders, dividing countries. It's one world, and we all share it as our home - it's the only home we've got, so we better care for it. 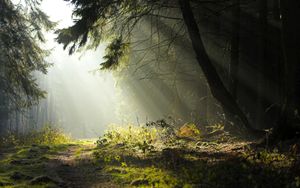 Buddhist teacher Thic Nhat Hanh said:
A human being is an animal, a part of nature. But we single ourselves out from the rest of nature. We classify other animals and living beings as nature, acting as if we ourselves are not part of it. Then we pose the question "How should we deal with nature?"

There are many ways in which, at a social level, each one of us can contribute to the restoration of balance on our planet, from voting for the right representatives, to financially supporting organizations that are good environmental watchdogs, to writing to our local newspapers our feelings and ideas. (By the way, did you know that the Sunday edition of the New York Times can weights more than 12 pounds, and that 75,000 trees have to be cut each week in order to print it?)
But most importantly, side by side with social action, what is needed in these critical times is a deepening of our awareness and our ability to see through lies, a deep cleansing of our psyche. We need an understanding that the world is a reflection of who we are inside, and therefore it's our responsibility, not only towards ourselves but towards the whole planet, to open to the depths of life. We must find the insights within ourselves from where we will again be able to experience oneness as the reality and division as illusion, from where compassion can flow into our lives and our actions. We need more meditation and love.

J. Krisnamurti said: What you are, the world is. And without your transformation, there can be no transformation of the world".. we need to realize that we are not just physical beings on a material planet, but much more than that: we are a reflection of the cosmos, and just as the universe is mysterious and vast, so are we. We are a miniature cosmos, each of us being intimately related to all Life.

As my spiritual mentor Osho (who was by the way very socially outspoken, to the point that he was poisoned for that) once told me: You don't have to do anything to experience existence, you just have to stop doing. You have to be in an absolutely unoccupied state, with no tensions, with no worries. In this state of tranquility you come into a certain tuning with the music that surrounds you. You suddenly become aware of the music of the sun, the trees, the mountains, the rivers and the stars ...

Our commitment to the environment: All our latest releases are packaged in eco-friendly Digipak, using less plastic and more recycled/recyclable material for the packaging.